"Damn, I could go for a cold glass of Nuka-Cola right now."

Lachlan Norman Hoffmann is a Sergeant in the Enclave Department of the Army, Currently stationed at Phoenix Military Base.

Born in Vault 116 near the Capital Wasteland on the 26th of November, 2254, Hoffmann learned a fair deal about computers, engineering and robotics at a young age from his mother, who was V116's primary roboticist, he also learned how to hack computers and even used those skills to hack the overseers computer and other computers in the Vault and would get into trouble almost every week. He even learned how to speak German because his paternal family was German. On 11 January, 2274, Vault 116 was opened by the Enclave and the Vault residents were assimilated into the Enclave.

Lachlan immediately went into military training at Raven Rock. After his basic training, he was sent on basic missions that mostly consisted of patroling and guarding outposts. After proving his utility to the Enclave, he was bestowed the rank of private first class. When Raven Rock was attacked from the inside Lachlan and other personnel of his rank did not pursue the person known as the "Lone Wanderer" but when one of the sentry bots guarding the area turned against them Lachlan knew it's weak points and told the other soldiers where to shoot and they managed to destroy the robot before it did too much harm.

He was also stationed at Adams Air Force Base before the destruction of Raven Rock, Hoffmann was present at the base when the Brotherhood of Steel attacked. He and some other Enclave soldiers escaped in Vertibirds and watched the destruction of the mobile base crawler from a safe distance away from the explosion and the Brotherhood. He is currently stationed at Phoenix Military Base in the Utah Wasteland. He was promoted to sergeant for his service to the Enclave and is now leading various missions across the Mojave and Utah such as attacking enemy outposts going undercover and going to Pre-War bases to gather tech, He was also made the Chief Roboticist and was ultimately the creator of M.A.P.S.

In 2286 during a mission to secure the Tooele Army Depot Lachlan lost his left arm. after he re-covered from a two week coma Lachlan built himself a robotic arm it worked but due to Lachlan's lack of skill in bio-robotics it was often glitchy and unresponsive, hearing about the institute and their synths Lachlan along with Sarah Henderson and Callan Barker headed to the Commonwealth.

Generally in a calm mood and good mannered though he can sometimes become impatient arrogant and ill tempered. He mostly keeps to him self though curiosity usually gets the better of him.

Lachlan has a lot more stories to tell anyone he trusts. Some might even find some of his holotapes in his hidden supply caches in the Mojave or Utah. Have a read or listen if you happen to run into him in his travels. 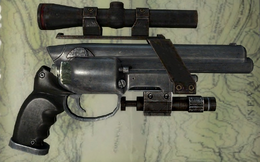 Lachlan undercover as a bounty hunter. 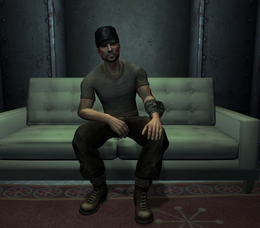 Sergeant Hoffmann in his off duty clothes

Hoffmann ready to do SCIENCE!

Community content is available under CC-BY-SA unless otherwise noted.