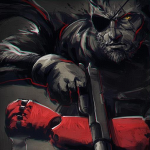 aka [NICKNAME] The Demon of the Wastes

You're out of uniform soldier! Where is your powah armor!? Don't have any? You expect me to believe that, maggot!? The truth is, you've lost an expensive piece of army issue equipment! That suit, is gonna come out of your pay! AND YOU WILL REMEAIN IN THIS MAN'S ARMY UNTIL YOU ARE... FIVE HUNDRED AND TEN YEARS OLD! Which is the number of years it will take for you to pay for the military issue Mk II Combat Power Armor you have lost! Report to the hangar and don't get back until you look like a soldier!

Outstanding. Now proceed on the double to the hangar, where you will stay guard duty! You will do a fine job! Have I made myself cleah!? ... YOU MORON! You're not to question my order! When I say jump, you jump! When I say fight, you fight! And when I tell you to die for your country, then you will certainly die! Have I made myself cleah!? ... NOW GET TO THE HANGAR! DISMISSED!

These are characters in the wiki created by me. If you find the short describtion entertaining, or heck, even the name, go ahead and click!

1. Sigvart Knoxon AKA The Demon of The Wastes: Born at an unknown date, Raven Rock. Sigvart is the first and more polished character who serves as a Hero turned Anti-Villain. He's the leader of Outer Heaven and The Fallen Angels

2. Anna Rose: Born the year 2261 at the Old Mormon Fort in Freeside. Anna Rose is the insane hero who opened a Followers of The Apocalypse clinic in the ruins of Salt Lake City. What insane stories will she have? Click and find out.

3. Angel Greene: This character is dead and only serves as the mentor to Sigvart Knoxon.

4. Jonathan Miller: Born in The Mojave Outpost in 2250, litteraly by accident. Jonathan Miller is the Second In Command of The Fallen Angels and the Head of MIlitary in Outer Heaven.

5. Revolver Cheetah: Born June 6 2244, Revolver Cheetah gained a name for himself few years after becoming a vigilante. He loves sadisticaly tormenting criminals and almost never show mercy despite how low the crime may be.

Retrieved from "https://ccfalloutroleplaying.fandom.com/wiki/User:SigvartTheDemon?oldid=9083"
Community content is available under CC-BY-SA unless otherwise noted.