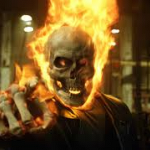 Hi, welcome to Fallout Roleplaying Wiki! Thanks for your edit to the The Enclave Outcasts page.

Superficially, there are some grammar errors and the formatting makes it unattractive to read. Make use of some headings to separate the commander's logs and then separate the single paragraph into several that cover each individual topic. Also, parentheticals ("my fallout equivalent of Ghost Rider/Saints Row) break the fourth wall by reminding us that we're reading a fanon.

As for the faction itself, it's kinda unoriginal, just using the basis of the defectors of a tech hoarding faction (a la Lyons' Brotherhood of the West Coast Brotherhood) but making them come from the Enclave instead. They even have the recolored armor to distinguish themselves from their original group. I mean, it's doable, but with the amount of propaganda the Enclave uses to brainwash its adherents into fighting for them and only them, I think it's a little far-fetched to completely defect and set out to go help the "mutants" they've been taught all their life are subhuman. Furthermore, the Enclave captured Project Purity in order to get the people of the Capital Wasteland on their side through a steady supply of water, which is one of the ways the Enclave Outcasts want to "get the good old US of A going again"; so really, the Enclave and their Outcasts had the same goal. Maybe distinguish between the genocidal tendencies under the Eden administration and they not-so-genocidal tendencies of the Outcasts?

It's also a bit odd that the squad (which is actually the size of a company) was able to make off with "three unmarked prototype stealth Vertibirds," considering that the Vertibirds would never be unmarked in the first place. Could you imagine the sort of trouble that would arise if the US Air Force didn't mark its fighter jets and then some of their pilots went rogue? The same concept applies here. I also feel like the bit about the Lone Wanderer comes out nowhere. It's just kinda shoehorned in for no other reason than the fact that he's the protagonist. All in all, I give this story like a C or C+. --Kastera (talk) 20:06, May 4, 2015 (UTC)

Retrieved from "https://ccfalloutroleplaying.fandom.com/wiki/User_talk:Ghostrider2539?oldid=14392"
Community content is available under CC-BY-SA unless otherwise noted.