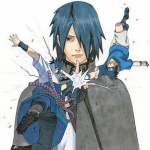 Hello Raniero, I'm an admin here on the Fallout RP Wiki (was made one shortly after its creation but kinda abandoned it over time) and I couldn't help but see your name and your work come up in this otherwise quiet wiki.

After viewing your edits and Salizar Contreras page I couldn't help but be impressed by your writing and your English skills.  I'd be interested in seeing more work from you in some fashion should you choose to share it with me here, or on some other wiki (like the main Wikia Fallout wiki itself)

I could undo your ban here but I consider this matter too trivial to step on any toes and ask that you either wait it out and continue or just ignore it and move on elsewhere.

Sure I would like to collaborate with you on a character. Also I am giving you permission to fix things in my pages.

The article is pretty good, but I have some issues. It says that he was born in 2250, his parents were killed and he tried to enlist in the NCR military in 2253 (when he was three?) and accepted into basic training in 2261 (when he was eleven?). I'm not sure if that is what you meant, but that doesn't make a lot of senseand brings up some questions: How did Salizar and Danny survive the raider attack? How did they survive without their parents? How did their parents deaths make them feel (may sound like a silly question, but it humanizes them)?

Another issue I have is that you refer to Salazar by his first name multiple times throughout the article. This is fine to do if you're differentiating between Salizar and Danny, but encyclopedic entries should use the last name of person. You can see an example from my page Zhōu Wěi Gāng, where my character and his father share the same family name, so I differentiate using their given name. I didn't find anything on Tranquility Lane that talked about writing conventions, so it bothers you, change it. If not, do nothing.

If I could criticize more, I would, but Salizar is a good read (I hate it when people don't have constructive criticism and just say 'it's good lol'). His Bitter Springs story sounds a bit similar to Craig Boone's but I guess you can't change canon and his story leaves him open to change. In conclusion: good read, but be mindful of your years and naming conventions. --Kastera (talk) 16:59, May 10, 2014 (UTC)

So if you wanna jump into Midnight Rangers, you can post after Cain.

I'm afraid my character is fair mate. Let's start off with the SPECIAL. Initially, you start out with 5 points to spend while already having five at all of them to begin with. I deprived all of the luck, so that leaves me with 9. I spent 5 on endurance, 2 on agility and 2 on charisma. S. Knoxon has almost maxed out intense training, and the rest from the intense training perks goes to strength. Keep in mind that this means I'll be losing 4 perks as a whole.

Given the fact that you need two levels per perk and level 50 is max in this wiki for the sake of... I dunno, badassery. Either way, that's how it is here. Anyhow, that means that I can have 25 perks. Power Armor is an exception as it is earned through questing and not leveling up. This means I have in total spent 19/25 perks. Four of them all being intense training.

Now, all skills start out as 15 in Fallout (not counting what you subtract and add in SPECIAL.) Given the fact that I took all my points away from luck, it goes down to 11 intial points per tree. More on the SPECIAL effect later. Tags add 15 extra points to what already exists, my tags being guns, sneak and unarmed. Thus these skills go up to 26. Now, for each level you gain, you get 10 points + half of your intelligence points. Including the fact that I have perks that increase the exact ammount of points I get, the math here is a boring process, so I won't go through the likelyhood of the exact ammount of points Sigvart gets. Point is, without the extras, I do have around 500 points to spend, all in all. Added with the perks, it goes up to around 550 - 600. I have forgotten the calculations, and I won't care to go through them again. What you max can spend in Fallout New Vegas for instance, is 735 points. Thus, I am more than capable of filling some of my skills out. Now, back to my initial points. Guns, sneak and unarmed initialy start as 26 for me, right? No. I'm afraid it goes further than that. Because of what I've spent on my SPECIAL, it increases even more. For each point you add to the SPECIAL, two more is added for the skills it's associated with. Thus, because of what I've spent on agility (7), I gain 4 points, and thus I have regained the previously lost points to guns, energy weapons, sneaking and other points associated with agility. So stealth has now gone up to 30 while guns and energy weapons has gone back to 15. There's alot more math to make, but the point is, it's done fairly, like it or not.

If you were reacting to the story, well mate, he has gotten his ass beaten many times. As has many of the other characters in this wiki. This doesn't change that they grow stronger, and they eventually become something quite out of the ordinary. Knoxon isn't unbeatable. Far from it. He can be beaten, he has been beaten and he hasn't even fought against the most dangerous foe in this wiki yet. The most dangerous foe being other RP characters. Except from his mentor, but that was a design choice by me for the character and how he reacts to the world.

Also, as for the other things you mentioned in your comment. No, he's not super intelligent, his intelligence is just about that of everyone else (if you're thinking of science or INT points.) And I haven't really added anything in his story that shows superior intellect of any kind. Futuristicaly clad? The only futuristic thing I see about Sigvart is his prosthetic arm. And that doesn't really qualify as clothing, and cyborgs ain't at all new to Fallout. Overly powerful? Everyone (thinking of RP characters) have their advantage. Sigvart's advantages lies in sneaking, unarmed combat and gun combat. I find that perfectly reasonable. There's many way to combat that, and to find ways to make it end up in the opponents favor. Pre-war era style? If using a combat armor which wouldn't even be considered military issue in the pre-war era (considering how low-tech MOST of his equipment actually is) is "pre-war era style", then I don't know if we can call any character a fair character. And perfect? I'll simply have to leave that at a nope.

But please, I have to ask you one favor. Don't be an ass about things. It is possible, in fact, to point out faults without being an ass. Anyhow, have a nice day (or night)!

Though it was not a constructive statement, it was my opinion. I usually enjoy reading articles, but that one just shouted "I am the greatest, I will never die!" I'm not in the mood to argue, but you do have some explained points. I will say this though: Using in-game SPECIAL stats is different to writing characters; They are not the Lone Wanderer or The Courier. I find it better to base them off how you would react if you, say, were born in the Fallout World.

Hullo there, was meaning to ask you about the image you used for your John Craven character article. Was curious if it was custom-made and trademarked, in other words, if It would be alright if I could borrow it for my character's article. :P

It's the most impressive Enclave trooper image I think I've ever seen in my entire life, quite frankly.

Yeah, you can use it; only on this wiki though. The image is used as one f my headcanon on a different site, but you can use it here since it was only a place holder, and no one bothered to help make the article.  # Nero

The reason I am not currently using it in TLane is because I use this wiki as a template, and it is visually impossible to put that image into an infobox. I am lucky I uploaded here so I knew beforehand. Compromise would be to cut it into a more portrait associated scale, but I couldn't bare to cut the shoulders off him. In short, he looks great, but is remarkably impractical to use on a page because of the landscape image. Don't use him, mane, just let him sit sadly in my user page.  # Nero

Hi just curious about these "Removing defunct file (Automatic)" edits. Ok first off why and also since it is saying automatic are you using some kind of bot or scrip? You haven't done anything wrong it's just this kind of came out of nowhere.

Retrieved from "https://ccfalloutroleplaying.fandom.com/wiki/User_talk:Raniero_R?oldid=22692"
Community content is available under CC-BY-SA unless otherwise noted.