This page is Enclave property and is owned by Eden2012. Anyone seeking to change it seeks my permission or there will be consequences. Recent work in progress (WIP)!!

Vault 110 is a well-hidden, isolated, and shockingly still-operational Vault-Tek Vault found somewhere deep within the all-out guerilla/urban warground that once was downtown in the city of Chicago.

Curiously concealed inside of a still-standing skyscraper's bottom-floor office, ultimately leading deep underground via elevator into a pre-War bank's underworks which travel all the way into the deeper sewer systems of what was Chicago, Illinois.

It is the largest-known Vault-Tek Vault ever constructed before World War III. 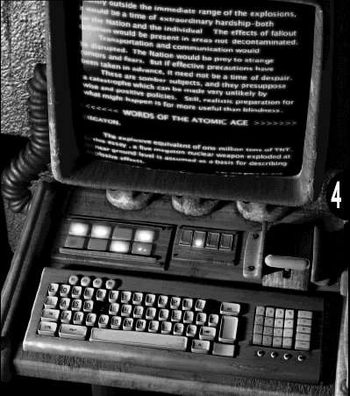 Vault 110's purpose as dictated by the mandates of the United States government program, the Societal Preservation Program (S.P.P.) was designed to deeply document and carefully experiment on (and with) various aspects of social engineering.

Long-term brainwashing techniques, subliminal imagery, instantaneously inspiring unadulterated rage and aggression via visual or biological ques, all in an effort to document and cross-reference the countless aspects (biological, psychological, etc) that conditions specific factors of the human mind's behavior into outright passivism and tolerance toward a purposefully incompetent, by-design oppressive authority, whilst the Vault's strangely always-female Overseer slowly (and covertly) instigates variables in the controlled environment to bring about a violent rebellion against her very own authority...

This individual Vault's S.P.P. mandated project goal was to collect enough research data, and cross-reference these archived findings enough with the constant assistance of a top-of-the-line prototype ZAX-series artificial intelligence (A.I.) secretly blueprinted by General Atomics International, and later optimized by Vault-Tek to discover what it is exactly that causes passively non-violent behavior in a human being, despite the human test subjects in question being surrounded by consistent, and aggressively destructive behavior and treatment...

Retrieved from "https://ccfalloutroleplaying.fandom.com/wiki/Vault_110?oldid=11244"
Community content is available under CC-BY-SA unless otherwise noted.